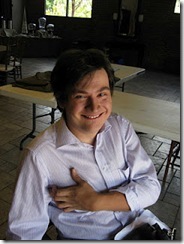 When I was little I was afraid of literally everything.I could not be left by myself in the apartment without having a panic attack. My mom would sneak out of the house to run errands when I was sleeping just so I wouldn’t know she was gone for 20 minutes. We avoided a certain store because a large – oversized Maya the Bee plush toy from a ceiling terrified me. When I was five the live TV  performance of the band Boney M that included a fire torch joggler on a unicycle scared me so much I refused to listen to their tape that I loved before. Once when my parents left me in a car for what could not have been very long I felt they just abandoned me and crawled out into the sidewalk.  I’ve had an overactive imagination, something I hear my nephew takes after me. I was always very attached to my mom and it made me me wonder. Was it my disability that made me as clingy as a survival instinct because I had to rely on others for everything, did I just got used to having my mom by me old day long I came to expect it or was I just soft?  Was it the time in the hospital when I haven’t seen my family for days at a time that left me with a feeling of abandonment? But then, I was in Budapest, I was seven years old staying at the nun’s apartment that was very old, had a squeaky wooden floor and made odd noises, reading “ The Six Bullerby Children” sitting in an armchair, I realized my mom just left and I was fine. It was something I needed to grow out of I guess And from that point on I’ve been fine.

I remember reading a piece from a couple months ago on Conductive Upbringing I believe, about how children with disabilities get attached to one parent. And that was my experience. And I remember other kids with Cerebral Palsy my age that always had their mother with them. Elementary school, high school, later college. Taking them places, participating in  conversations, gossiping with friends, doing things on their behalf. I always thought what strange relations these were. Just like my mother these ladies have quit their jobs to help their kids get better. But I was very lucky that mine went back to work when I was 14. Nobody wants to be joint with the parent at the hip. It gave me my own space when I needed it, room to become my own person, my separate life. A world full of my own thoughts and friends and secrets and places. The art was in letting ago at a time that was not a minute too soon. Then I went to the university. I would disappear for an entire day and enjoyed coming home late on school’s paratransit service. I enjoyed how this limited my parents’ involvement and they knew that was the right thing for me. At the same time I’ve seen other students with CP riding on that same bus to their classes having their mothers tagging along. It reminded me of my first day of elementary school when the teacher said “I think your mother can go home now”. And she did, although she expected to sit through that school day in the back of the room. And that was  all it took. And I feel that if my parents didn’t let me go  like they did when they did it I wouldn’t be where I am today. I remember that Warsaw University Disability Office tried to interject a little bit of independence to those other students’ lives by insisting to deal with them directly rather than having the stay at home moms speak for them, but soon gave up.  As they grew older, they continued the co-dependent relationship. They felt stuck. It can be scary to let go. It’s easier to stick with the familiar, but I say life is about progression. For me, the next step was the scariest of all and something I have never done before. Live by myself in a strange country, something I knew I had to try, wasn’t sure if I was ready for.