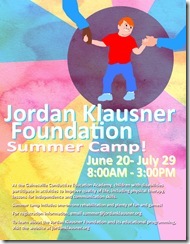 A lot of our European friends often ask why are small, community based Summer rehabilitation camps so popular in the US. Busy lifestyles of parents, lack of time and the commitment required are just one aspect of it and I addressed it already in a post few weeks ago on modern parenting. To have a year-long, ongoing program, you need to discuss another- money. Jordan Klausner Foundation is no different from countless other organizations in the country that, come June, will see an great spike in interest in Conductive Education.Children are out of school and parents are desperate to make up what they've neglected over the past year in working with their kids through their disability. Or they're looking for some extra rehabilitation time. Some are just looking to try a different approach Summer is the busiest period for everybody at JKF with pupils coming from all over Florida but often also out of State and other countries. It's easy to maintain short term excitement. It doesn't translate that well into a year long program. You need a more detailed concept, a fuller commitment to have it function outside of the six week program. While a lot of summer camp programs rely heavily on volunteers that are often very willing to help out over Summer out of the sheer joy of helping out and doing something meaningful- to have a center for children with Cerebral Palsy and run it smoothly you need some professional paid staff. To do so, you need money. To get it, you need to figure out when it's going to come from.

Remember, in America, Conductive Education is not insurance funded or provided free by the state. Do you want to form a non profit? These call for a lot of paperwork and time. You better make sure that you have enough of determination to commit to it and enough funding to sustain it, so you're not stuck with a defunct organization. Sponsors and grant makers are not tripping over their feet to help kids with Cerebral Palsy. It doesn't sound that exciting if all you can talk about is hard, repetitive, every day type of work. Originally the media were excited, when JKF launched its first summer camp dubbed "miracle class for children".  The excitement wasn't lasting. The media need to see miracle or at least a different angle to cover the story, they can't run with "business as usual " article every year. If there is nothing to report on it will not be reported on. How do you get your message out, what will your message be? Do you have a marketing budget? Is it well thought through? And again... more money. Will you charge for your services? Have parents pay for it? From our experience, not a lot of families have the financial means to pay for expensive programs. If you'll charge too much, they will not come and not pay at all. Some set ups I've seen have both a for profit and a non profit component. If they don't come, then you are wasting the infrastructure you have built. The staff you hired, the building rent, the you utilities, all need to be paid. Are you going to apply for grants? You can't rely on them, they're not that easy to get, require time and more paper work and you really shouldn't expect to get them year after year. Some States have support programs if you form as a school like Florida does with McKay scholarships. But to get that money and run as a school you need to be a school, meaning meeting educational requirements of that school and a lot of reporting. For JKF, the main problems were finding the right kind of building- being zoned for school and passing fire code and other inspections. This is again not something you think about when you put together when you have a Summer Camp that people seem to put together anywhere, temporarily, privately.

And then - there's a Conductor. Not only do American programs seek out Peto Institute -trained Conductors, they mostly look for them to be born in Hungary. While again it's easier to get one to come for a few weeks either visiting or from a different program already from US having a permanently hired alien at your school requires a costly Green Card procedure. More time, more paperwork and more money. And then, expect the medical community, the therapy experts and parents to be critical. They will not endorse you just because you formed.  The children will not be pulled out of existing routines or schools during the year to do something that may be understood and obvious in Europe but is not in America. This is why some Conductive Education centers in America end up doing less or doing things differently. They compromise because they don't have a choice, and they do what they can. Of course it may not be enough but it has to. It is a different world out here, something I never understood before I moved here.