Making it: The leap of faith 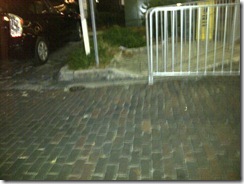 I can't say enough. When I moved to America nearly eight years ago I wasn't sure if I could make it alone. I sure hoped so, but I've never done anything like this before. I was excited to try, but also scared. I threw myself in at the deep end. You never know how and if things will work out and sometimes hope is not enough. I never had to take buses everyday to get places, to figure out how to get from one point to another, to shop for myself, to maintain my apartment in livable conditions, to take care of my wheelchair, to have presentable clothing. My brother predicted I'd be back in three months. I never had to roll myself in a wheelchair around town as much as I did  during my first year in America and I built quite an upper body strength as I mostly have done it indoors before.  They say, you never know what your capable of until you try, but I feel I was lucky. Lucky that my level of functionality was enough for me to make it. That the reality created for me by the Americans with Disabilities act, the world of lift and ramps was what I needed to succeed. When I first arrived here with my parents who came along to help me set up, I was so determined to not have them help me or push my chair, I rolled myself everywhere, up every hill until my hands bled as if I needed to  prove something, to them but also to myself. My mom and dad intended to help to work a routine. To figure out how and which bus to board. But that never happened, because we were delayed by hurricanes, looking for apartments, furniture and essentials. They left and that Monday I had to get to school like I've been doing it for years. And that's all she wrote.

There are some valid criticisms of the ADA. It was crafted to address the needs of the veterans returning from war and was a result of the civil rights movement. It was not written with neuromuscular disabilities in mind. Restoring functionality of an injured soldier and creating the right kind of environment for children with Cerebral Palsy to learn and develop  are two different things. If you're missing a limb you need prosthetics and therapy. Maybe a wheelchair, but you're otherwise functional. That's why you  may need a special bathroom and maybe a ramp to get around. The initial approach was to reshape the surroundings. With disabilities at birth it's more complicated. You're not compensating for some disadvantage - you are shaping a human being. Yes, we  since had Individuals with Disabilities Education Act  (IDEA), and Section 504 of the Rehabilitation Act (504RA) but parents of CP children still face problems negotiating with schoolboards to create opportunities for them. Accessibility, accommodations, everything seems to be more complicated when you have to take into account more individual needs. And it's obviously about so much more than just taking a bus or getting into a building, but it feels like you need to exhibit some level of functionality and independence to use some of those things.  Cerebral Palsy is of of course an umbrella term. As different children are affected in different ways some are more while some are less functional. It’s not only walking and not walking. Some kids speak, some are non verbal. Some cannot control the spasticity of their limbs.  Tensions, contractures. Rehabilitation helps them in different ways and helps them gain new skills, but that doesn't mean they will benefit equally. It's impossible to predict the outcome. Growing up in my mind is not about the result, it's about the process.  You keep optimistic, you keep encouraging and  engaged and  you keep in mind even a minor skill that you pick up can incredibly increase the quality of life.  Work hard and try hard. Every new functionality means a different level of independence. If anything, I think what my parents gave me was to make me functional and not necessarily to have me run a marathon, although they always believed that nothing is impossible. They wanted me to walk.  And I’ve seen many kids walking as a result of years of Conductive Education. I wasn’t one of them, but I’m independent. I’m not disappointed.  That’s what my parents always wanted.I think they’d be happy how I turned out regardless