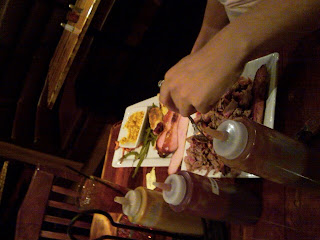 You get used to doing a lot of things differently when you are in a wheelchair. When you visit a venue you often enter through a side or a backdoor because the owners decided to impress customers with elaborate stair designs. Parts of clubs and pubs have entire sections and floors that are not accessible to you, stages have no ramps because those  places were  running  before the ADA and codes were enacted, grandfathering them in. Most of the problems that I've encountered involve really old businesses in really old buildings. Still, even in those scenarios the owners usually try to do something to accommodate their customers in wheelchairs. It's better for business to let customers in rather than keep them out by artificial barriers. I rarely find those kind of problems in newly renovated and open places. But I did Friday night.

My friend and I decided to grab a bite at the Smokehouse Restaurant during their inaugural week. I know one of the people who works as a cook there and he did a really good job circulating invitations on Facebook. It wasn't something we were planning in advance to do; rather a spur of the moment decision. I knew I would not go through the main door as it had a giant step in front of it. I remembered seeing a sign a couple of days before  that wheelchair access was through the other door so I wasn't too worried. There was no sign of this sign when we finally arrived. The host although very endearing had no idea what to do with us. My friend even  offered to lift me and pull me up through the door. It seemed for a minute that nobody there knew where the other entrance was as the greeter was checking with other people. After a while somebody showed up to lead us to the gate of the Luna club next door. We went through a cluttered courtyard that wasn't lit. The waiter, I assume, that's who he was was using a flashlight so we could see our path to the side of the building. It was obvious, as nice as everybody was, that they were not expecting to have a customer in a wheelchair. They didn't plan to have anyone see this area as it had more of a hidden backyard feel. There was no light, no signs and it wasn't cleared for customers to walk by.  It didn't seem like a proper entrance. On our way out my friend simply decided to help down the step rather than going through this complicated procedure again. I was surprised by this experience. Again, I'm used seeing many unorthodox solutions. I did not expect them to rebuild their front door. This is a new business and a new construction  however- Smokehouse opened after many months of remodeling of the building that previously housed Rue Bar- a dance venue. In the age of the ADA and modern building codes I expect the staff to at least know what to do and be ready for a customer in a wheelchair. Maybe then my appearance wouldn't cause such a consternation.

But of course there are other places in Gainesville  that have all kinds of ADA and accessibility  related problems. Rockey's Duelling Pianos  Bar doesn't have a ramp to their stage [typically the law requires a specified length of a ramp per every inch up of the stage in Florida] and this is a new construction, oddly located next door to Code Enforcement; Double Down Live! is not too concerned with their stage either while Looseys has a 3-step on the way to the bar.
Posted by RStrzal at 6:19 AM