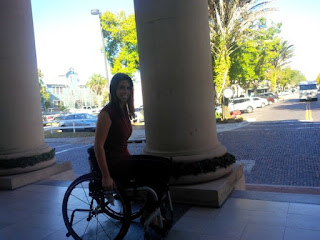 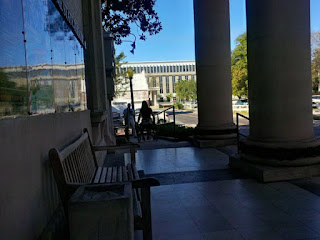 On Monday morning, Angie Angers, a reporter from a local CBS affiliate, GTN decided to spend 24 hours in a wheelchair. Just like in August we partnered with one of the biggest equipment providers in the country, Numotion- although this time they gave us (and her)  a different chair for a day. A light sports model that doesn't even fold. Angie seemed to have the navigation figured out pretty quickly as she went down and up the Hippodrome Theatre ramp both forwards and backwards, but her "left" and "right" was still a bit confusing. Her initial idea was to be in the wheelchair for a day like all our other participants earlier in the year and then report on her experience on local news. Here's what's brave about it. She was eager to do it. Her managers were excited for her to do it. And we were ready to go. You may ask, why is it such a big deal, it's just a wheelchair. But if you consider that reporters from the competition (ABC affiliate WCJB and student-ran PBS station WUFT)  were expressly told no to sit in the wheelchair, not to try it, not to pose with it, Angie's determination gains a new dimension. Where other stations focus of not offending anybody and tried to stay clear from making viewers uncomfortable and misunderstanding the point, GTN went for it. Yes, they will be tactful, yes, they will explain the motivation. But there are always risks of someone seeing this as mockery. Because disability and everything that comes with it scares people. To me- my wheelchair is a tool. It's an accessory. It allows me to be mobile. And it looks great. I don't project my fears, reservations and despair onto it and you shouldn't either. The types of reactions that we've gotten from the other stations was precisely the reason why we continued with the project and why  I want it to spread. To challenge how people feel about disability. How it's them who make awkward things that shouldn't be awkward and how a wheelchair becomes this sacred object with magical powers it was never intended to be. Some people use wheelchairs others wear glasses and we are all the same. And I will continue with projects like these until people continue to be weird about it, quite frankly. The more you fear it, they less likely you are to explore and learn about it, and we need to start having the discussion on disability. There was never a more pressing time to talk about wheelchairs and their roles in our lives. From Kylie Jenner's Interview wheelchair photoshoot and even more bizarre backlash  to changes in Medicare that will cut equipment reimbursements- the general public would support measures to address it but it doesn't understand it - and therefore it doesn't care. We haven't found the right model to talk about these issues and getting people interested and I'm doing my part. To me it's obvious that it has to start with people understanding wheelchairs and their users first and figuring out how they feel about it. To get there - they can't be scared of the chair or the conversation.

Later today I received information that GTN decided on a different angle. Some of the other managers became concerned with the story reported from the first person perspective. At first  I thought it meant they got scared and don't want her to be in the chair, but that's not the case. She is still filmed in it and goes about her day. Just not on the news. For her to be in the story someone else would have to report on it, so she decided instead to build her report from the video collection FDAAF already has and then talk about Foundation's mission, wheelchair issues and what is the idea that I'm pushing rather than a summary of Angie's day. GTN staff will give us videos of her experiences that you will access on our website hopefully this week.