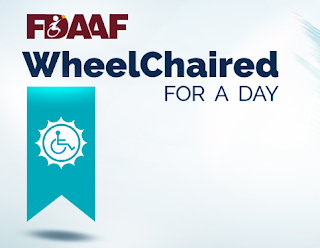 We all care about different things. We all get excited about different causes. For me- my number issue is, was and forever will be- disability. And it's not because I was looking for an issue to get involved in  in my spare time, to volunteer with something or to socialize over cocktails while fundraising among the local elite. If you know anything about me- I'm sure you realize that money and as of late time- are the things of which I don't have a lot.  The wheelchair- no matter what I do and how accomplished I will be in my profession- will always be the first thing people see when they meet me. It's  a block or a filter for them and they will judge me through it. Along with my spasticity, my posture, my expressions. It also determines how I get around- where I can't and can go. But it would be wrong to say that I started my nonprofit and its campaigns to make things better for myself, because I think that with my education and accomplishments somehow I manage- but I do have an insight into what it must be like for others like me.

We all care about different things. I have a friend who only donates to Cat Society and that's his passion. I know I was asked to join multiple Boards or campaigns where I respectfully declined, because in turn that wasn't where my passion was. So when we started the Wheelchairedforaday campaign we knew that some people would decline. Some were scared, others felt it may had been inappropriate others just didn't want to get sucked into a project. It's all fine- it's something I care about so they don't have to. Our initial idea was to give people the wheelchair experience, to have them stand (or sit and roll) with the disability community. It was thought of in a way that wouldn't require a big investment of time and effort on either part and yet be educational. Two reactions stood out as most surprising: TV reporters were told not to sit in the wheelchair because someone might get offended, and a local lawyer that I know- and for whom I had some degree of respect for the type of career he was able to build- rather than respectfully decline decided to really give me a piece of his mind and called it "superficial". I don't know if he was calling me superficial or the idea behind this challenge but either way I found it greatly offensive. I dedicated three years of my life to establish this non profit and I still don't understand why needed to knock it down. Then he started to ask: why wheelchairs, why not some other disability? To which I thought I can't be everything to everyone all at once and I got to start somewhere. And a wheelchair is what I know and what I relate to. There's a lot of great causes out there, many more worthy than mine. But we can't all be solving world hunger and I like sticking to what I know. I guess every awareness campaign has some gimmick aspect to it as they are intended to command attention and generate publicity. After months, years of talking and planning about doing things we finally did something. So yes, there was a bit of "This is us here's what we want to do and here's why, pay attention" reasoning behind it. But I have to say we were surprised with how much substance, how much data, how many different reactions we uncovered with this. It made us think how much something like that was really needed. And we never asked anyone for money. We wouldn't say no if they offered but they didn't- and what we really wanted was the experience, were the stories. And unlike some other campaigns that make people do crazy things in the name of charity- which don't get me wrong, also has merit- ours was exactly about what the Foundation's mission was. And all we asked was that people use a wheelchair.  I don't think there's anything superficial about making someone experience a different way of living, being, getting around, a different mobility. And I understand everything- but why would someone be so determined to pop my balloon or let the air out of my tires?