A quick guide to apartment accessibility

There's a lot more that goes into choosing a suitable apartment for me than the number of rooms, last month's utility bill and the size of the fridge. I'm in a wheelchair and I believe that  my home should be the one place where I shouldn't have any problems getting in and out, using the restroom and kitchen without a risk of injury, things falling on me, being to high to reach or otherwise attacking me. I don't necessarily mean ADA [Americans with Disabilities Act] compliance either. In fact, I grew up without any grab bars in our home in Poland, which is probably a good thing because public places during the communist period didn't have them either. Instead, Conductive Education, the rehabilitation method from Hungary gave me a pretty good understanding of how to use the limited functionality of my body to get things done. How to stand, lean against the furniture, the sink, the wall, to get into the bathtub, on the toilet, how to shift my balance. What do you do when the grab bars are not there? Sometimes you would even get on the floor, kick the wheelchair out of the cabin just to do what you came in to do. It's not only a historic problem of 1980's Poland. Recently I had to use the restroom at Gainesville's Hippodrome Theatre. After finding no "special bathrooms" I used the regular one. Often I even prefer the grab bars not being there, because they were not custom build for me, the angles and points of support are not where I would like them and they just get in the way. But no matter how functional I am if things are to high for me to reach, sitting, standing on spastic knees or kneeling I can't use them.

The biggest problem area have always been the kitchen and bathroom for me and that's because they come with things already built-in. Some apartment complexes have wheelchair accessible units, but that usually means a roll in shower in place of a bathtub. Even in apartments that had those modification with one [if there were more than one] bathrooms larger for a chair to get into the shower, the so called common areas [cabinets in the kitchen, thermostat, the chain on the door, etc] were not lowered. Back in 2004 when moving to America out of the dozen if not more complexes I visited I only saw one that had the top cabinets moved down. It's my house, there shouldn't be anything I can't get to!

I moved a month ago. The extent of modification tat the manager of the property is willing to do changes from person to person, but here's what we all found was reasonable for them to do. 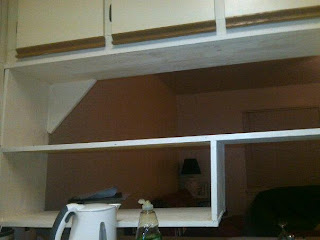 Kitchen: Having no use of the top cabinets because I can't reach them is not only frustrating but it cuts my storage space in half. Having them lowered as they are supported by the celling would require some heavy construction, so we agreed to put some extra shelves in the large open space above the sink, directly underneath them. 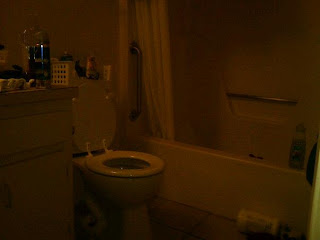 Bathroom: I need two points of support to get on the toilet from the standing/kneeling position. I prefer having the toilet that I transfer to supporting my left hand as my left side is more functional.  American sinks are usually a good point of support for the other hand, because they have cabinets built around them and are very sturdy and secured to the floor and wall . However, in my new apartment the sink is on the further left. I lean on the bathtub on the other side. We replaced the abnormally high toilet that was there when I moved in. It was extremely high for me to get on, taller than the standard, making it difficult for me to pull myself back on it and the bathtub, which is typically very small in the US gave me no support.   I would have to put my shoes on before entering to gain a few centimeters in  height. After that old toilet flooded my bathroom a few times [leaky tank at first, then it dripped from the wall] and given my accessibility problems the maintenance replaced it with a small one that is as small as the bathtub, also giving me more room to maneuver, although getting it secured  to stop rocking took a few days.  I really like that American bathtubs are small enough for me to crawl into, by pulling my legs in when waist up I'm already in. 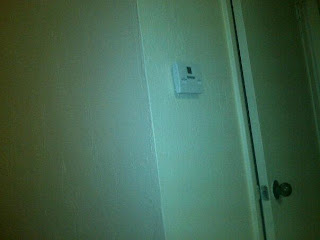 The thermostat. They had to lower it and paint the wall in the old spot. You can't read the setting on an electronic display if you are not looking at it from the right angle.

The fan/light pull switches. The chains hanging from the ceiling lamps operate the fan speed and lights. More advanced apartments have them as switches on the wall. The chains were too high for me to reach so they've extended them. 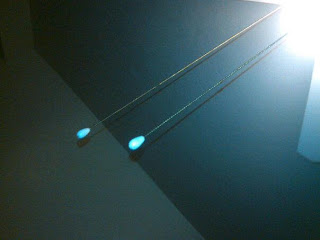 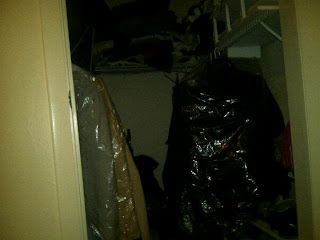 The walk in closet. There is never too much storage space when you are in a wheelchair, because you can't really pile things up high. American apartments often have a separate chamber with a door for clothes. Mine only had a wire rack for shelves on the back wall, I asked them to put things on 2 others.

Garbage. As you can't get to the dumpster in a chair because of the fact that the street is historic and there's no ramp to it, the maintenance will pick it up if I leave it outside the door. 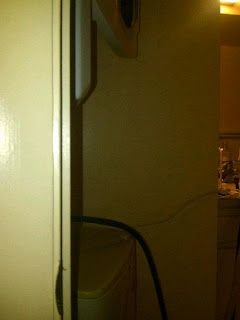 Parking.  My apartment requires residents to have passes assigned to their cars for parking, without the fear of getting towed. I don't drive but people often give me rides and they stay over. Persons and cars change so we had to figure out a removable, more generic pass

<<Washer/Dryer. My apartment doesn't have them.  Some apartments come with them, some have hookups for them, but my complex has a laundry room where you operate the machines and pay by the load. I found it's easier for me to use a portable washer and dryer. They are small and click into your faucet.